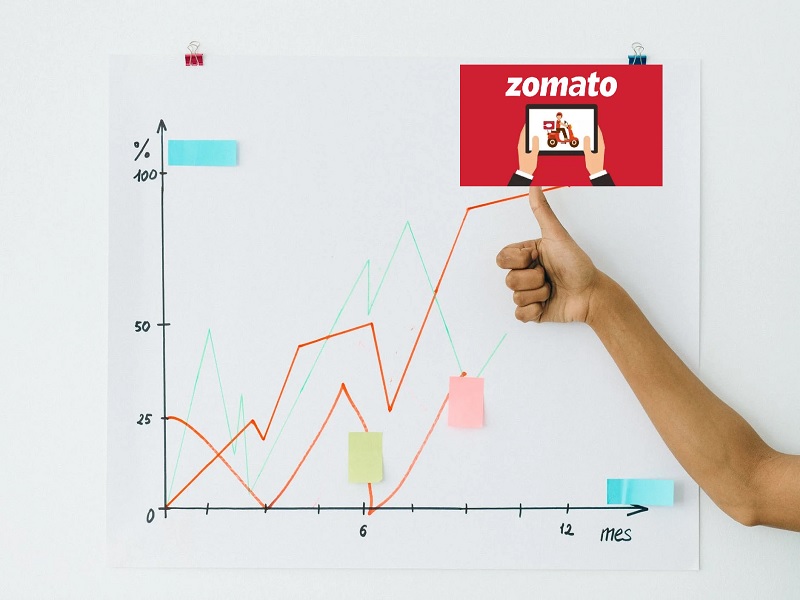 Zomato shares have gone up more than 5% on the BSE on Monday, trading at 161 apiece, after the online meal delivery platform revealed second-quarter earnings last week.

Despite the loss, the company’s consolidated revenue from operations increased to 1,024 crores for the quarter, up from 426 crores the year before. The company’s losses were due to investments in the expansion of its meal delivery operation. Zomato announced three options in business Curefit, Magicpin, and Shiprocket, as part of its long-term strategy to focus on core business.

Zomato shares have a target price of $220, according to brokerage firm ICICI Securities, because the company’s revenue growth in Q2FY22 was extraordinarily robust and well beyond forecasts. Both supply (restaurants) and demand (MAUs, MTUs) measures showed a significant rise in operation.

This resilience comes from strategic advertising and marketing efforts aimed at re-engaging consumers of the second covid surge.

Though some of these variables are beyond the person’s control (such as protracted monsoons), ICICI Securities thinks that everyone else (such as significant investments in Next 500 cities and rebranding) will provide spine advantages.

On a sequential basis, Zomato’s delivery cost per order climbed by $5. But the food delivery behemoth does not expect delivery costs to rise anymore and is sure that the contribution margin will remain positive in the mid-and long term.

JM Financial believes that by prioritizing growth above profitability and opting for balance sheet flexibility in 2QFY22, the company hit the right notes. The firm retains a ‘Buy recommendation with a target price of 180 per share.

Moreover, JM Financial’s report noted, “We remain confident on the company’s long-term growth prospects as it is well-positioned to benefit from significant industry tailwinds such as increased tech penetration and rising income share of digitally native millennials/GenZ.”

For more such updates, keep in touch with us!!