Why Deepti Vempati and Kyle Abrams Broke Up ? 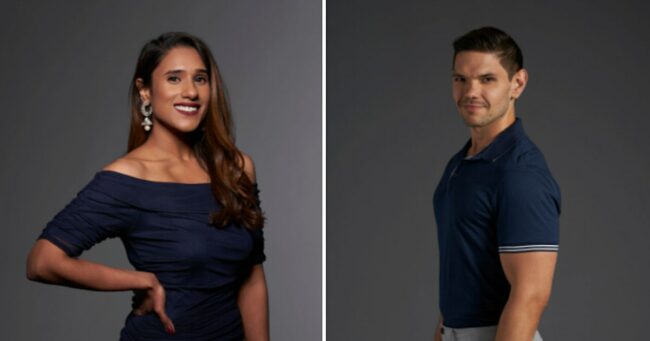 Kyle Abrams and Deepti Vempati have decided to part ways. Abrams confirmed the broke up with his Love Is Blind co-star on Monday on Instagram.I know many of you are wondering where I and Deepti are right now,” he added. “Since filming of After the Alter wrapped up in early summer, we had decided to move in different directions.”

Abrams, who is 30 years old, however, is not now seeking a romantic partner. ‘I have since started a new relationship which I plan to keep quiet for a while,’ he stated.

The 31-year-old Vempati has not yet spoken out.

She and Abrams both appeared in the second season of the hit Netflix series. Vempati accepted a proposal from Abhishek “Shake” Chatterjee, and Abrams proposed to Shaina Hurley, despite their confession during the post-finale reunion that they had met in the pods and fallen in love.

Vempati and Abrams debated whether or not to give their love a shot in the three-part Love Is Blind: After the Altar special. In the third and final episode’s closing minutes, they were finally reunited.

Abrams explained to PEOPLE why he was reluctant to take their relationship to the next level at first.

The pressure he put on himself was “huge” since “I don’t want this to fail,” he stated. “For this reason—she being my best friend—I was apprehensive to participate. What’s more, if things don’t work out, the friendship is damaged. Because you always have to consider the next step if your relationship ends, even if you don’t intend for it to.”

Next, he said, “I know what it’s like to start dating someone and then have to quit the relationship because they’re your best friend. You shouldn’t spend much time with that person any more because it would be unfair to your future partner. My present girlfriend and her ex-boyfriend should not be seen together. That’s just not cool. Absolutely nobody would welcome something like that.”

Abrams continued, saying that he was “holding myself back” because of his fear of being without Vempati as a best friend. But they maintained the same dynamic once they became a couple.

Nothing changed after that, he added; “I felt like we were dating already.” “Almost daily, we’d run into each other. We talked for a long time. It was a team effort throughout. She was already familiar with my loved ones, so there was no awkwardness.”

Abrams expressed gratitude to his followers on Instagram for rooting for him and Vempati on September 19.

Thanks to everyone who has “followed our path through painful vulnerability and supported us along the way,” he wrote. In the end, he decided, “I have no idea what lies ahead. From now on, I want to enjoy each day as it comes without looking back.”