The movie Vikram, which stars Ulaganayagan, also known as Universal Hero Kamal Haasan, Malayalam superstar Fahadh Faasil, and Makkal Selvan, also known as People’s Treasure Vijay Sethupathi, has become a huge box office hit, grossing more than Rs 400 crore. However, many people were waiting for the film to be released on the streaming platform. Well, it is good news because Vikram will be streaming on the OTT platform for those who want to watch the Lokesh Kanagaraj actioner again or for those who haven’t watched it yet. Check the release date here. 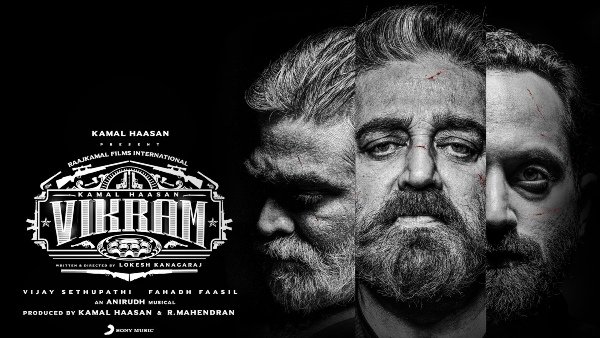 Originally scheduled to hit theatres in April 2022, the film’s release was postponed multiple times, first to March 31st, then to April 29th, and eventually to June 3rd. Numerous other high-profile films with April premiere dates already locked in, as well as issues related to the ongoing pandemic, were to blame for the repeated revisions to the release date.

Fortunately, the movie was released in theatres on June 3rd, with dubbing options available in Malayalam, Hindi, and Telugu, the latter two being actually titled “Vikram Hitlist.” It is no doubt to state that the film reached the viewers’ expectations and did well at the box office. Well, for those waiting, Kamal Hassan’s movie will be available for streaming in Hindi, Tamil, Telugu, Malayalam, and Kannada on the OTT service Disney+ Hotstar. It will be released on July 8.

The announcement was made on the official social media account of the streaming service by posting a special film in which Kamal Haasan is seen firing weapons at the screen while the mesmerizing music of Anirudh Ravichander plays in the background. “Your watchlist will soon include a huge hit! Vikram: Hindi, Tamil, Telugu, Malayalam, and Kannada hitlist streaming begin on July 8 “Hotstar Disney+ tweeted.

Talking about the plot of the film, it picks up after the events of his last blockbuster Kaithi. It starred Karthi in the major role and has been hailed by critics and audiences alike for its compelling storyline, intense action sequences, and launch of the Lokesh Cinematic Universe (LCU). Fans are now eagerly anticipating the formal announcement of Vikram 3 and Kaithi 2 by the director and the producers.