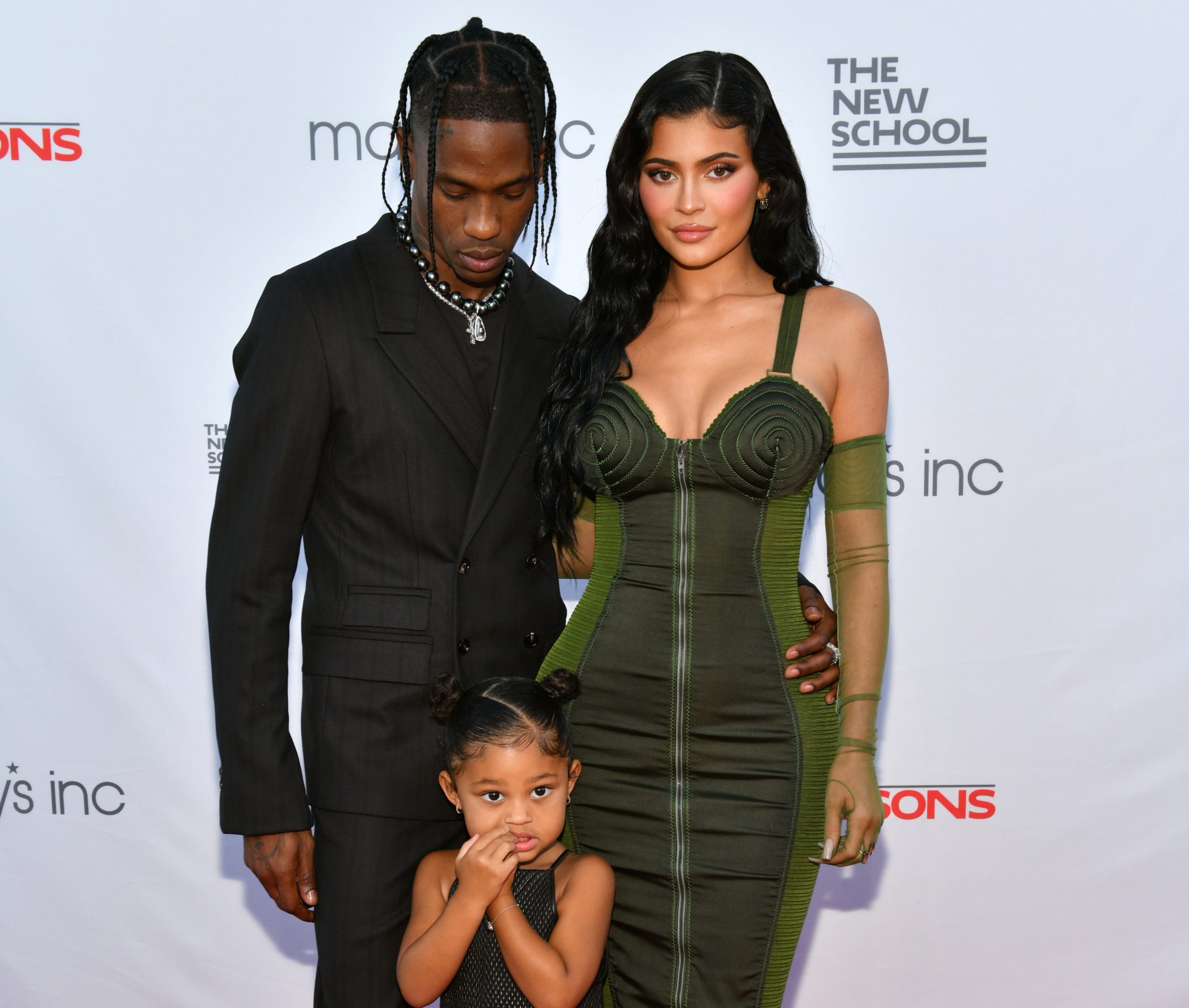 However, later Kourtney, the Tv star slammed such rumors and confirmed that she is not expecting but the pregnancy rumors for Kylie Jenner turned to be true. Hence, the model is these days just extremely glad and delighted to detail her pregnancy’s ups and downs with her loved and dearest ones.

An Insider has confirmed that the model is keenly showing off her baby bump to all her friends though she has not made this news publicly confirmed. The Insider claims, “She looks amazing and very happy. She is excited about her little baby bump and has been showing it off to friends. It’s cute to see her this excited.”

Kylie and her beau, Travis Scott are expecting their second little one and they are already co-parenting a 3-year-old daughter, Stormi Webster. Notably, Kylie is keeping her busy work and schedule aside nowadays and enjoying the moments before her baby’s birth.

A Source said, “Kylie is doing well. Since becoming pregnant, she has been trying to slow down a bit and to rest more. Still, she is very busy with Stormi and her brand. She seems to love it all though.”

Further, adding the source clarified, “She is beyond excited. She has been wanting to give Stormi a sibling for a while. She loves being a mom. She is thrilled that she and Travis are pregnant again. She has been enjoying her pregnancy in private. She has only spent time with close friends and family.”

The Insider stated, “Kylie is preparing to welcome her another kid with Travis Scott and she has been enjoying her pregnancy in private. Kylie is a few months along. She has a cute bump. She is beyond excited. She has been wanting to give Stormi a sibling for a while. She loves being a mom. She is thrilled that she and Travis are pregnant again.”
The TV star is keenly desired to have more and more children and back in 2019, while Kylie talking to one of her fans, the alum of ‘Keeping Up With The Kardashian,’ she stated that she is just very eager and thrilled to have more and more little babies. Later, in 2020 she shared a video and claimed that surely she will be having about four children, but yes doesn’t she need to have a timeline for this.

In April, Kylie while on her Live Chat with pal Stassie Karanikolaou said, “I want seven kids down the line, but not right now. Pregnancy is just not a joke, it’s a serious thing and it’s hard. I’m not ready for that just yet.”

Earlier, in 2021, the little Stormi turned 3, and her mother, model Jenner via her Instagram account conveyed the little girl her love and wishes. Thus, Kylie noted, “Thank you God for sending this little soul to me. crying today because I can’t stop the time. It’s all the little things I’ll miss like your cute voice and our long talks on the potty.”

Furthermore, Kylie also added and wrote, “watching you experience everything for the very first time has been the best part of these last few years,  🤍 but on the other side, I’m excited to watch you grow into the most special girl I know you will be and all the amazing things I know you will do. Happy birthday to my baby forever!!!!”

In 2020, Kylie Jenner launched her own Cosmetic brand, ‘The Summer Sailor collection,’ and it struck as the launch of the first-ever false lashes of the Jenner. Later, in 2020, she turned to be the highest-paid celebrity as per the info of ‘Forbes.’

Back in 2017, Kylie and Scott first met, and soon after ten months the model gave birth to Stormi. However, over the last past four years, they have been on and off from time to time, and finally, as of June 2021, Kylie and her partner were back again.

Later, in 2018, Kylie while speaking to GQ told, “Travis said, ‘I’m going back on tour—what do we want to do about this?’ Because we obviously liked each other. And I was like, ‘I guess I’m going with you’… And then we rode off into the sunset.”

After, the birth of her Stormi, Kylie shared a heartfelt video on her pregnancy and wrote, “I’m sorry for keeping you in the dark through all the assumptions. I knew for myself I needed to prepare for this role of a lifetime in the most positive, stress-free, and healthy way I knew how.”

Also, in an Interview, Travis revealed that he was even ready to propose to Kylie and mentioned, “We’ll get married soon. I’ve just got to sturdy up—I’ve got to propose in a fire way. It got to a point where I was like, ‘I need her with me to operate. She’s that one.'”

In 2019, just a few days later, the model attended the Wedding functions od Justin Beiber and Hailey Baldwin, Kylie via her Twitter handle declare that she and Travis will be separating. She tweeted, “Travis and I are on great terms and our main focus right now is Stormi. Our friendship and our daughter is a priority.”

In June 2021, the pair and their daughter were spotted together in the event of the ’72nd annual Parsons Benefit,’ and the trio posed altogether. In this event, the rapper was honored as a ‘visionary’ in technology, arts, and fashion. That time, Travis expressed his love and reverence to bother her daughter and Kylie and publically he said, “Stormi, I love you and wifey, I love you”.

Since then the pair is often seen sharing pictures of one another and as of now due to the pregnancy news of Kylie, it is confirmed that the pair is back together and things seem to be sorted amongst them.