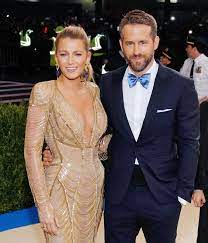 Reynolds claimed that his wife helped him out amazingly with the Script of Deadpool Script and Other Movies. He gushed about the actress and noted her to be a ‘really talented, multihyphenate’ kind of person. Thus, he is singing Blake Lively’s praises!

The actor recently appeared with Jess Cagle at a SiriusXM Town Hall, in order to promote his new film, ‘Free Guy.’ Ryan, 44 openly gave the credits of his success to his wife, Blake, and noted that she plays a great role in the victory of his many of the worthy on-screen projects.

He claimed, “(Blake) is a really talented, multihyphenate kind of person in this, you know, weird burgoo of an entertainment industry that we work. She’s helped me so much in Deadpool, all kinds of movies that have been big successes.”

Probably, Ryan said, “She’s always got a lot of bricks in that wall.”

Notably, Reynolds was asked by one of his fans that what is the major great and best part Lively plays in his life and that prompted the actor to detail how few of his projects were created.

He answered, “I write on a lot of my movies. It’s been a survival mechanism for me for a long time. Sometimes I’m credited, sometimes I’m not. There’s a lot of A++ writing that I’ve done that was actually Blake; Blake would jump in, grab the keyboard,  and (say)’What about this?’ And I’d be like, ‘That’s incredible,’ ”

Ryan continued to detail and noted, “And you know, it’s funny. I don’t know. Maybe it’s cause there’s a, there’s inherent sexism in the business. I will say that a lot of times, ‘She wrote that, Blake like wrote that not me. That was, that was, that was her.’ And it’s like, they still, later on, repeat the story as ‘I wrote it.'”

Ryan Reynolds began with the teen soap opera “Hillside”. By 2004, he played the character of Hannibal King in the film “Blade: Trinity.” The actor has also acted in romantic comedy shows and played the role of FBI agent in the crime action film “Smokin’ Acess.”

He also did a guest role in the episode Douche bag in the City. He also did a supporting role in “Ex-Men” film and was cast in the Spanish and American thriller “Buried”. Reynolds portrayed the version of Superhero and has also worked in comedy series, documentary films, and other breathtaking adventures.

Reynolds found critical and commercial success with “Dead Pool”. The film was one of the record-breaking high films and made a worldwide opening of $264.9 million. By 2018, he collaborated with Netflix for the thriller action film “Underground” and is currently working for the upcoming thriller “Red Notice.”

A few days back, Ryan and Lively made their Red Carpet return and looked to be stunning in their killer looks for the premiere of Ryan’s ‘Free Guy.’

The actress opted for a stunning pink Prabal Gurung gown which featured the cutouts on the side and accessorized the glamorous look by pairing the mismatched silver earrings and various rings.

On the other hand, Ryan looked handsome and sharp in a beige Brunello Cucinelli suit and black-and-white plaid shirt. He chose to keep things fun and casual by pairing his accessories, a paisley pocket square, and sporting brown suede shoes.

Significantly, Blake and Ryan are parents of three daughters: 6-year-old James, Inez, 4, and Betty, 1. And they recently celebrated the 10th anniversary of their first date earlier this month and shred the snaps via their Instagram accounts.

See also  Pauline Tabor Cause Of Death, Author of The Madam of Six-Twenty-Seven Clay Street Dies At 87

Blake with their sweet couple snap wrote, “10 years later. We still go out on our ‘first date. But in much more comfortable shoes.” The pair shared and showed off their date night looks.

She also posted a photograph of Ryan standing near Boston sushi eatery O Ya, and wrote, “If it weren’t for this place. We wouldn’t be together. No joke. No restaurant means more to us.”

On the other hand, Reynolds also posted two selfies of themselves, standing in front of the restaurant along with the caption. He noted, “Our favorite restaurant with her 4th favorite date.”

His caption along with the snap contained their trolling language too, which seems to be their love language.

Later, Ryan further reposted a cropped picture, full with a disclaimer along with his face covered, and wrote, “Posting this again because I cut out my wife’s cute earrings. She trained me better than this. Sorry if I let anyone down.” Meanwhile, the actress shared that post vis her story and clarified, “That’s right.”

As per the Reports, Ryan was the second-highest-paid actor of 2020. Last year, he was estimated to have a whopping earning of $ 71.5 Million. He also owns the Ging brand and Aviation America.

The actor has an ownership stake in Mint Mobile. Reynolds waived his astronomical $278 million fees as an act of Selfless Charity to AbleGamers.org.

The actor toiled hard in the initial phase to meet his destined stardom. Reynolds is one of the highest-paid top actors. And Ryan owns an enormous net worth, which is estimated to be about $150 million.

Ryan and Lively worked as co-stars for the film, ‘Green Lantern’ and then in 2012 tied the knot. It seems to be simple for their fans but it is not so. Ryan revealed how he met Lively again and the way it worked out for them.

In July, the actor sat for an Interview with Will Arnett, Jason Bateman, and Sean Hayes for the Podcast of ‘Smartless’ and said, “I met Blake on the darkest crease in the anus of the universe called ‘Green Lantern’. And we were friends and buddies and then, about a year and a half later, we actually went out on a double date, but we were dating separate people.”

Ryan, 44, and Blake Lively, 33 meet in early 2010 while they began the shoot for ‘Green Lantern’. However, at that time, Ryan Reynolds was married to Scarlett Johansson, his wife since 2008. On the other hand, Lively was dating Penn Badgley, her long-term partner, and co-star on ‘ Gossip Girl.’

Later, Blake and Ryan crossed paths and once again meet, and feel for each other very soon. Ryan claims, “We hung out and kind of, you know, we always kind of kept in touch but sort of casually. And then next thing you know, she was going to Boston. I was going to Boston. So I was like, ‘I’ll ride with you.’”

Further, Ryan Reynolds joked and stated, “We got on the train and rode together and then I was just begging her to sleep with me.”

Thus, the romance for lively and Reynolds quickly made a move, and the actor was the one to take the initial step. He said, “Honestly, it was kind of one of that silly sort of … like out of a fairy tale. Like a week later, I was like, ‘We should buy a house together.’ And we did.”

Further, Ryan Reynolds claimed, “The only reason I think I’m able to continue doing this in this way, I think, is that I’m present with my kids and my wife, and my marriage is incredibly important to me and that friendship is important to me, so I’m able to kind of get through, you know.”