Maci Currin, the tallest women with the world’s longest legs 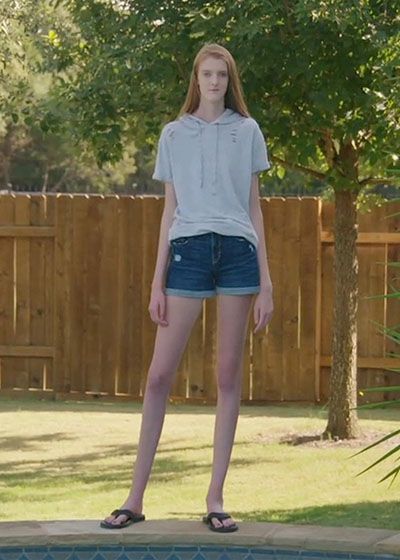 Before Maci Currin even started middle school, her physicians had estimated that she would reach a height of 6 feet, 4 inches. That prediction was easily surpassed by the time she was a seventh-grader.

Guinness World Records has officially recognised Currin, a senior in high school who stands at a towering 6 feet, 10 inches, as the woman and teen with the world’s longest legs. They’re responsible for an impressive 60% of her whole stature.

In the United States of America, a teen of 17 years old has smashed two world records because of her exceptionally long legs. Maci Currin’s legs are officially the longest in the world for a girl and the longest of any adolescent, according to Guinness World Records.

The Cedar Park, Texas, teen measures in at a towering 6 feet, 10 inches. Her legs, each of which is almost 4 feet in length, account for 60% of her overall stature.

Previously held by Ekaterina Lisina of Russia, the adolescent has now surpassed her in the Guinness World Record for longest female legs, as reported by Metro Ne.

According to Ms. Currin, having long legs and being the tallest member of her family has both benefits and drawbacks. I was bullied because I was taller than everyone, she said, not because of my legs. Around my sophomore year, I simply stopped caring what other people thought of me, and once I did, nothing affected me.

The adolescent claims that in 2018, while hunting for a pair of leggings, she became aware that her legs were longer than typical. When she couldn’t find anything that fit, someone asked her if she wanted a special pair of leggings made.

She then submitted an application to Guinness Book of World Records for having the world’s longest legs (female).