Lisa Rinna opens up on the relationship of her daughters! 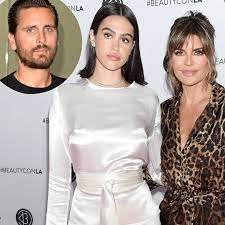 Notably, the 19-year-old model, Amelia is these days dating the 38-year-old, the American media personality, Scott  Michael Disick, and the pair seem to be very serious for one another. However, her mother, Lisa doesn’t seem of approving these, as she always criticizes and jokes on her Amelia’s relationship.

On Wednesday, Rinna mentioned that both the daughter, Delilah Belle Hamlin, 23, and Amelia Gray Hamlin, 20 came to her home and glanced at a few of the older clothes. Within few seconds, Delilah’s eye caught the Wedding dress of Rinna’s mother and she was amazed to see it.

This was not the end, then the author took hold of the show and confessed that she and Harry Hamlin are all happy with Delilah and her fitness coach. Thus, Lisa said, “We love Eyal. He’s so good for Delilah. And, I mean, she’s really growing into herself. Harry’s made it quite clear that he would not object if Delilah and Eyal got married, which is pretty shocking, but that says a lot.”

She further added and stated that she is absolutely puzzled that why Amelia did not date Harry Styles and said, “I can’t say the same for Amelia at this point now. Like, why can’t it be Harry Styles? Why the f— is it Scott Disick?”

However, keeping their personal lives aside, Lisa also detailed that how things have changed and her little girls have grown up. She noted, “I still see my girls as little. Those kids were swinging on the swing set five minutes ago. So to see them as women, it’s mind-blowing. I mean, they grow up so fast, and I do feel like I’m losing my grip because as they leave the house, as they leave the nest, you lose control.”

Rinna, furthermore, confessed, “I’ve had some moments where I’m in that house by myself, and everyone’s gone. And Harry’s off in Romania working, and I’m like, ‘S—, man. Everyone’s gone.'”

Last month also, Lisa Rinna has clarified that is just extremely unhappy with Amelia’s relationship and is not going to support her. In the media, she strictly claimed that she was terribly shocked to listen that he daughter ahs started to date Disick.

As per the reports, Amelia and her beau started to date one another in October 2020 and they are often seen together hanging out together. Scott shares three kids with Kourtney Kardashian, his ex-partner, Mason Dash Disick, 12, Penelope Scotland Disick, 9, and Reign Aston Disick, 7.

Hence, that time Lisa Rinna said, “It’s a what the f–k moment. She’s 19! He’s 37 with three kids, hello!” Later, the author claimed that she got to hear this dating report of her daughter, while she was on her way with Erika Jayne to get few Christmas decorations. Initially, for the Rinna Beauty Brand founder, it was hard to believe the reports which revealed that Amelia is in a serious romance with the TV star, Disick. Erika Jayne stated, “But there’s nothing you can do. And the more you push, the bigger deal. Does Harry agree with that?”

Amelia’s mother, while speaking to Garcelle Beauvais, in an interview said, “Amelia has had her struggles in the press but now it’s a new headline. No one’s talking about the eating disorder anymore. And you know what, thank God. As a mother, I’m like, ‘Good.’ This gives her another label to deal with.”

Later, to defend himself, Scott also on his part clarified, “I don’t go out looking for young girls. They happen to be attracted to me because I look young. That’s what I’m telling myself.”

However, Amelia in July, while celebrating the Birthday of her beau publicly proclaimed her affection and love for her Scott. In fact, she has been receiving criticism for her love tribute to the one who has made her entire ‘world better.’

The hater instantly lit up the comment section of the model with the harsh critics of her relationship with Sofia Richie’s ex.  One of the followers said, “Scott was 19 when you were born.” On the other hand, another user asked her to address their age difference of about, nearly 20 years.

She that time, via her Instagram wrote, “Happy birthday my love. you light up my life, and make my world better, she captioned the series. I can’t imagine what I would do without you.”

Further, Amelia stated, “Thank you for being you. the most caring, loving, special person on this planet. I’m so lucky. I’m so blessed to have met you. I love you.”

In July, Amelia even conveyed her Birthday wishes to the little Penelope and wrote a short message for the little kid. Hence, she is doing her best to become a super cool stepmother.

See also  Rupee slumps as it declined 49 paise to 75.82 against USD in early trade

A source stated, ” Despite the age gap, they truly have a lot in common. Amelia has been able to spend more time with the kids recently and is embracing it. She’s learning a lot. It’s definitely a whole new world for her, but she loves being around them and is grateful she gets to have this experience. She thinks they are amazing and is really good with them. She and Scott love planning fun activities with them.”

On Hamlin’s birthday, Scott splashed out about $57,000 on a lavish Birthday gift for Amelia. Scott Disick presented Amelia, an extravagant birthday present as a sign of his love, a signed Helmut Newton print of about  $57,500.

In March, the TV star clarified that her model girlfriend means a lot to him and they are extremely serious for each other. Thus, an Insider said, “He’s been telling friends how much she means to him and how into her he is.”