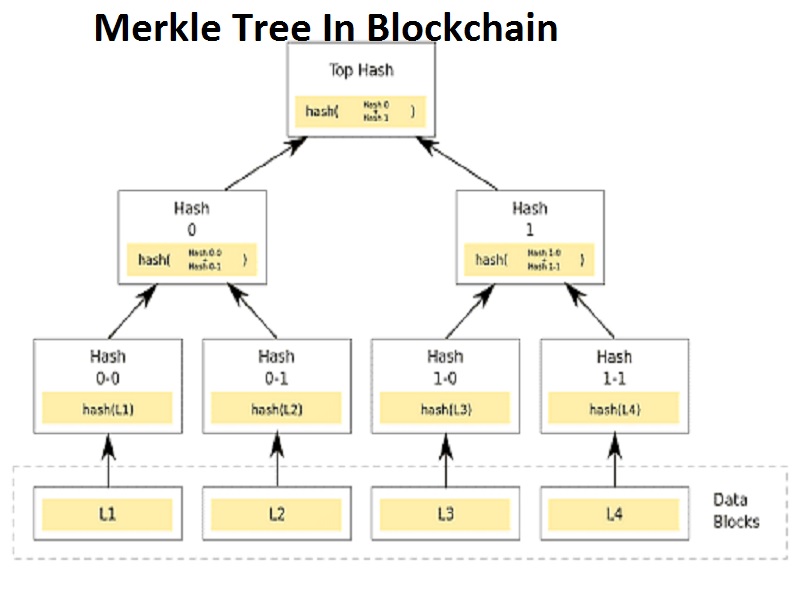 The Merkle tree is a type of binary hash tree with three types of nodes: leaf nodes, non-leaf nodes, and root nodes. In any decentralised ledger, a Merkle tree can be used to check and keep track of the integrity of transactions.

Both Bitcoin and Ethereum use the Merkle tree.

Cryptocurrencies and blockchain, the technology that made them possible, are no longer mysteries. For anyone interested in cryptos, the first step to understanding their true nature is to learn about blockchain structures and how they work.

Merkle trees can help you figure out how different blockchain structures work. Ralph Merkle of Stanford University came up with the idea of the Merkle tree in 1980. It is often used in peer-to-peer (P2P) networks to deal with the need for computing power and memory space. It wouldn’t be too much of an exaggeration to say that Merkle trees made blockchain technology a huge success. So let’s look at what the Merkle tree means and how it works.

A brief look at Merkle tree

Simply put, a Merkle tree is a way to show how data is organised on purpose. It lets a large amount of information on a blockchain be checked quickly and easily. As was already said, Ralph Merkle came up with the idea by accident in a paper called “A Certified Digital Signature.” But no one thought that it would be a big part of a decentralised ledger in the future.

Since it was first made, the Merkle tree has made cryptography better. But it became important for cryptocurrencies after Bitcoin’s mysterious creator put it in the code that makes Bitcoin work. After that, Merkle trees were also used by Ethereum and other cryptocurrencies.

Merkle trees are a useful part of the Bitcoin network that uses hashes instead of large information files to verify data. In a Merkle tree, the relationships between nodes and their levels are described in a unique way.

There are a number of transactions in each block of the blockchain. Keeping track of all these transactions and figuring out which ones belong to which block can be expensive and frustrating. The efficiency of a blockchain can also be hurt by this. But with Merkle trees, all of the transactions are set up in a way that makes the most sense. This means that less data is needed for verification and less CPU processing.

The hashes of each transaction are kept in a node of the Merkle tree, which is usually called a leaf node. But we still have work to do because we need to pair leaf nodes to make non-leaf nodes. After doing the math, we get Hash 0 and Hash 1, which are called the parent nodes or non-leaf nodes of the hashes of L1, L2, L3, and L4.

Lastly, the hash of Hash 1 and Hash 2 is calculated by putting them together. This takes us to the root node, which is the Merkle root. By looking at this example, we can see that Merkle trees work by repeatedly hashing the child nodes until only a single hash is left in the structure.

By only looking at the tree’s root, the Merkle tree can tell you for sure if a transaction has changed the tree. Merkle root is stored in the block header, so it can’t be changed. This makes a decentralised ledger more trustworthy and reliable. Merkle trees use a one-way hash function, which is important to know. This hashing would keep going until the proof of data was separated from the data.

Why Merkle trees are important for blockchain

We’ve talked about what a Merkle tree is and how it works, so now we just need to talk about why it’s important for blockchain. Merkle trees are used in blockchain technology and even crypto platforms because they are so useful. Some of these advantages include:

Reducing delays: Delays are not allowed when transferring, computing, or traversing data. This is why many blockchains use a Merkle tree to make sure that there are no delays in the network when data is being sent. Merkle trees are an important part of blockchain because they reduce the amount of memory needed to prove that data is correct and true.

Tampering detection: The Bitcoin blockchain is a distributed P2P. Because the same data is on each computer connected to the P2P network, there can be inconsistencies or even tampering of data. In this case, the Merkle tree makes it easy for miners to spot any kind of transaction change or inconsistency.

Quick data verification: Without this idea, all of the data would have to be sent all over the network, which would slow down the network, make it less efficient, and cost extra money. With the help of Merkle trees, you can avoid this kind of situation. Merkle trees make it easy to check data quickly with a reasonable amount of computing power and bandwidth.

Merkle trees may sound hard to understand, but they are an important part of blockchain technology and cryptocurrencies. Without this idea, Bitcoin, Ethereum, and mining would not be able to use a system that can’t be trusted.