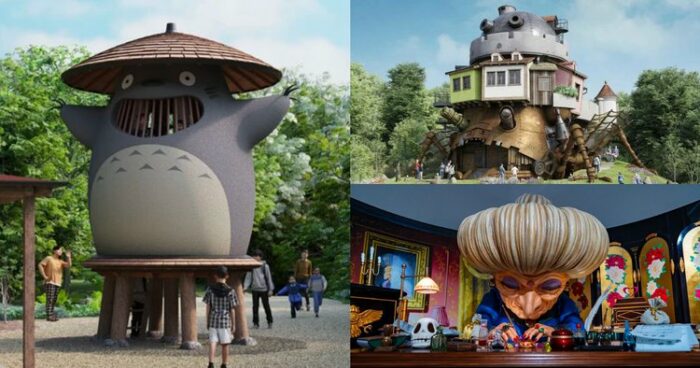 There is now even more of a motivation for Studio Ghibli fans to visit Japan. Within Aichi prefecture, which is less than an hour away from Kyoto by rail, a new theme park is now open, devoted exclusively to the works of the popular animation firm.

Ghibli’s Grand Warehouse charges adults 2,000 yen ($13) on weekdays and 2,500 yen ($30) on weekends and public holidays. Every day, it will cost you 1,000 yen to enter both the Hill of Youth and Dondoko Forest. Tickets for kids are half price.

Adults will pay 3,500 yen on weekends for the multi-pass ticket, which will go up to 3,000 yen during the week, while children’s tickets will be priced at 1,500 yen.

Opening on November 1st, Ghibli Park is located in the former Expo 2005 grounds of Aichi Earth Expo Memorial Park and brings to life some of the most beloved characters and scenes from the studio’s animations.
“Although the previous three years have been incredibly trying because of Covid-19, there has been incredible happiness throughout. The timing of this exhibition’s opening seems significant to me as we confront and ultimately triumph over Covid 19 “Studio Ghibli Co. chairman and president Koji Hoshino made the comments at a preview event for the park a few days before it opened to the public.

They say Ghibli Park isn’t like other theme parks because of how it was designed.The official website for Ghibli Park specifically states, “There are no significant attractions or rides in Ghibli Park.”

Visitors are urged to “take a stroll, experience the wind, and discover the wonders” instead.Director Goro Miyazaki, son of Studio Ghibli co-founder Hayao Miyazaki, said during a promotional event before the park opened, “While I hope that the park will open soon, I’m also apprehensive about whether people will truly come and enjoy it.”

Given the centrality of nature to Ghibli’s canon, the site, located in Nagakute, Aichi Prefecture, where the 2005 International Expo was held, spans 7.15 of a larger park measuring 194 ha.

The “Hill of Youth,” one of the three completed areas, serves as the park’s entrance and has a tower elevator decorated with scenes from Ghibli films like “Castle in the Sky.”

In contrast, the rural trails and colossal Totoro statue in “Dondoko Forest” bring to mind the nostalgic tempo of the famous anime film “My Neighbor Totoro,” released in 1988.

Ghibli’s Grand Warehouse, an indoor hangar-like section of the park with diverse attractions, including 14 sets from 13 of the studio’s film classics, is expected to draw a lot of visitors.

There is a recreation of the alley from the beginning of “Spirited Away,” and guests can sit in a red velvet-covered train seat next to the movie’s iconic “No-Face” character.

When all five sections of the park open the following year, the Aichi region expects an influx of 1.8 million tourists annually, generating an estimated 48 billion yen in economic activity.

Miyazaki and colleague animator Isao Takahata established Studio Ghibli in 1985, and their films have since won over audiences all over the world with their unique blend of sentimentality, bravery, greed, and engagement with the natural world.

Currently, the studio runs the extremely popular Ghibli Museum on the outskirts of Tokyo; tickets go on sale at the start of every month and routinely sell out within hours.