Congress Ignores The Judiciary And Asks To Respect Reform Urgently 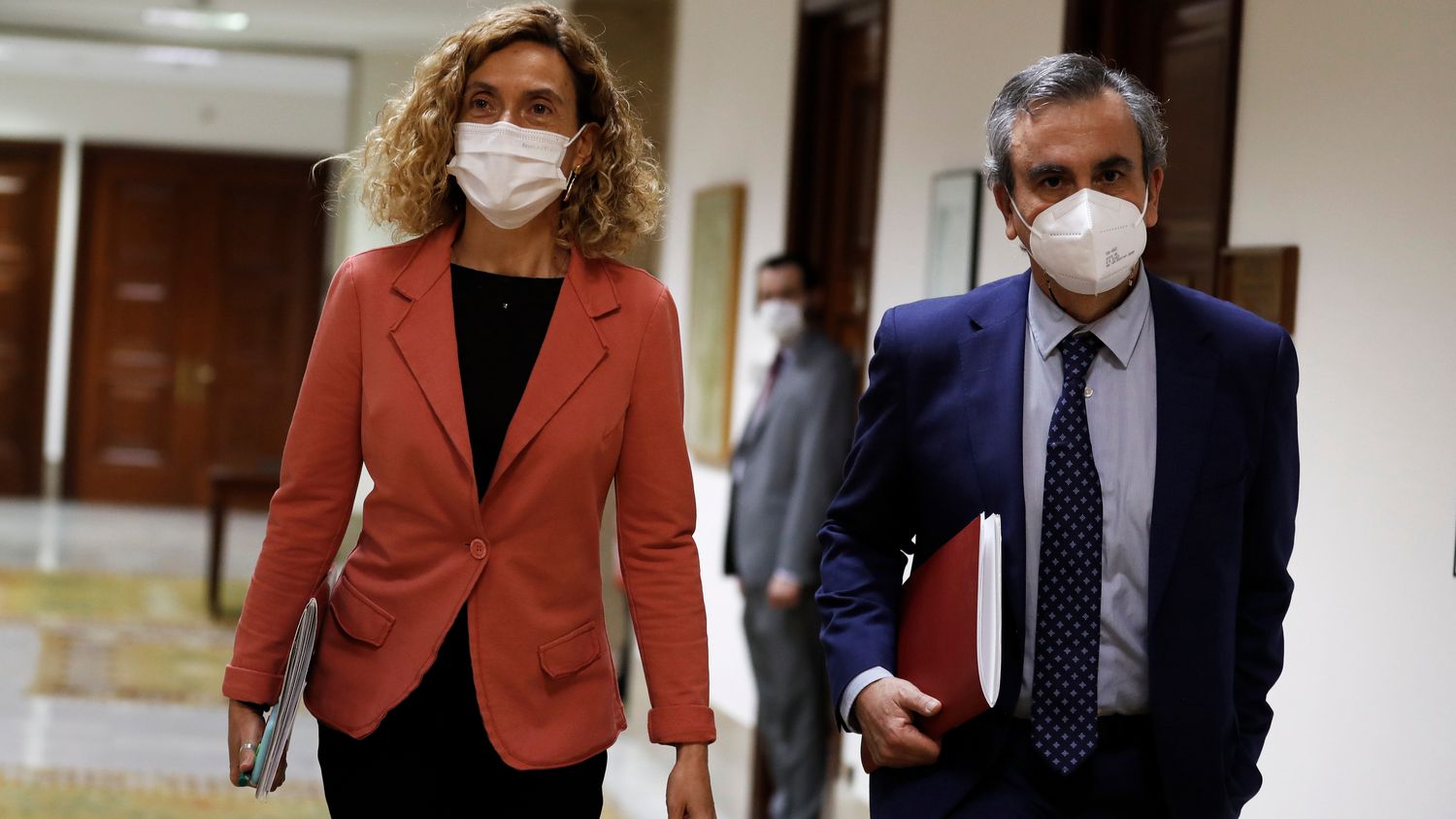 The pulse between the legislative and judicial powers has no truce. The Bureau of Congress on Tuesday rejected the request made by the General Council of the Judiciary (CGPJ) to reconsider its decision to expedite a legislative initiative that seeks to limit its powers when in office.

Congress understands that this claim is an attempted interference by another power of the State and has opposed it. The Board has asked the judges’ body for “respect” and has reminded it that the legislative power of the State is exercised by the Courts, that is, the Congress and the Senate.

The decision has been adopted by majority with the support of the PSOE and Podemos, promoters of the legal reform, against the PP and Vox. The popular are studying resorting to this measure in Europe.

The debate on the institutional conflict between two of the powers of the State has also been transferred to the Board of Spokespersons that was held just after the Table and, then, to the appearances before the media of all the parties.

“The power of the State is held by the Cortes Generales and in no case are they obliged to request prior reports or appearances from the General Council of the Judiciary,” said PSOE spokeswoman Adriana Lastra.

His counterpart from the PP, Cuca Gamarra, replied after seeing another proposal from his party defeated in the Junta to reconsider the urgent proposal of Socialists and Podemos: “A modification of an organic law of this scope must be carried out with sufficient guarantees from the legislative point of view,

The agreement adopted this Tuesday by the Board of Congress responds to the one, which in turn, approved the governing body of the judges on January 21.

That day an extraordinary plenary session was held in which a majority of members (16 out of 21) signed a manifesto in which they consider that the decision of Congress to process the legal reform by the fast track, without listening to the opinion of the Council or of any of the sectors involved, “does not respect the requirements of the principle of separation of powers.”

The body headed by Carlos Lesmes, whose mandate expired more than two years ago, asked the Chamber to reconsider its decision and that is what the Bureau has strongly opposed on Tuesday.

See also  Beyond The Edge Season 2: Renewed or Canceled?

The first vice president of the Congress, the socialist Alfonso Rodríguez Gómez de Celis, took advantage of the appointment this Tuesday of the Table to raise, outside even the agenda, if it was believed appropriate to give an institutional response to the agreement adopted by the full Council.

The Table addressed the matter and in the end, after the debate, the majority made up of the three components of the PSOE and the three of United We can approve against the two votes of the PP and that of Vox to reply to the Judiciary because they understand that this body of The government of Congress is competent to do so and because they defend, in addition, that according to Article 93.1 of the Chamber’s Regulations, the processing of this modification of the organic law of the Judicial Power to limit the powers of the Council when it is in office can be done through the emergency procedure.

The two parties that make up the current majority of the Table did not want to stay there and include in their response communication to the Council some not minor clarifications on the distribution of powers in a rule of law.

And in their final point they specify: “The Congress of Deputies exercises this power in accordance with the provisions of the Constitution, which recognizes the General Parliament as representative of the Spanish people, as the seat where the pluralism of our society is manifested and expresses its general will, without this Table being responsible for other actions in the legislative procedure that carry out the functions attributed to it by the Regulations of Congress,

Faced with the opposition of PP and Vox, the socialist Rodríguez Gómez de Celis rebuked them by questioning that they were taking positions that go against the legislative responsibilities of the deputies in general. They were not convinced.

The mention of the Table of the Courts to request “respect” for its powers and tasks from the judiciary is the key to the response and what immediately caused controversy between the parties in Congress itself. Lastra recalled it in his speech during the Board of Spokespersons and before the press.

Gerardo Pisarello, a member of the Table for Podemos, described as “barbarity” what he took as an attempt by the General Council of the Judiciary to “limit the autonomy” of Congress and the division of powers and defended that the legal amendment is now pursuing it is “ending a constitutional anomaly” by allowing a party, alluding to the PP, to block the renewal of that judicial body for years.

The PP spokesperson, Cuca Gamarra, questioned above all the procedure of “urgency and without guarantees” carried out by the PSOE and Podemos, with a majority at the tables, in the face of such a serious issue and avoided positioning herself on the merits of the matter and that a functioning judiciary can continue to push for key appointments.

Gamarra went so far as to declare that this claim promoted by the urgent means by those parties “threatens to deteriorate the democratic quality of Spain” because it represents “a dangerous interference in the separation of powers.”

The PP took the opportunity to critically compare the speed with which the entire reform on the functions of the Judiciary has been processed in a few weeks, supposedly because it is of interest to the two parties in the Government, in view of the slowness with which parliamentary initiatives promoted by the opposition are addressed.

“I have no doubt about the separation of powers, but also that it is necessary to legislate with quality and without interference from another power and to do so within the European framework,” Gamarra added.

Sources from the leadership of the PP specified that this party will now study the possibility of appealing this action of Congress before the Venice commission, which depends on the European Union, when the reform of the law is definitively approved in the plenary session of the Lower House, a scenario that is forecast for mid-March.

The European Commission for Democracy through Law, known as the Venice Commission, is the advisory body of the Council of Europe responsible for providing legal advice on constitutional issues that promote respect for fundamental rights among its member states. Members of the PP were last week in a meeting in the Council of Europe and already presented their position.

The European Commission has followed with detainment the attempts of the coalition government , first, to carry out a broader and deeper reform of the law of the Judiciary to change the method of parliamentary election of its members and, later, this express reform to limit their power in office, reluctantly observing that this change be brought to Congress without first consulting with the main political and judicial actors.

“It is important that when a Member State reforms its judicial system, the necessary consultations are carried out with all relevant actors, including the Venice Commission,” said Justice spokesman Christian Wigand for the last time last December. “We will closely monitor the situation and await further information from the Government of Spain,” he added.

The PSOE has deactivated, for now, its claim agreed and registered with United We Can in October to apply a reform of the entire method of election of 12 of the 20 members of the Council, which now requires 3/5 of the Cortes to only most. Pablo Echenique, the spokesman for Podemos in the Chamber, however, warned this Tuesday: “My personal opinion is that at some point we will have to modify that mechanism.”

The members who promoted the extraordinary plenary session on January 21 consider that, after the response of this Tuesday from Congress, the governing body of the judges can no longer propose new initiatives to try to get the two government partners to change their minds, but some of them, consulted by EL PAÍS, trust that the express reform will be denounced to Europe in other ways.

Some members of the CGPJ tried to include in the manifesto approved on January 21 a direct reference to the possibility of denouncing the attitude of government partners in Europe, but it was finally discarded due to doubts that it was the institution itself that was involved. in the process.

EEchenique did not limit itself to defending the legality and opportunity of wanting to modify the functions of the Judiciary in the face of “the partisan blockades” of the PP, but took the opportunity to launch some serious warnings to the Council itself.

“I call for you to agree to respect democracy, it is unprecedented that they continue to appoint magistrates for life and now that they intend to intervene in the functions of the legislative branch. It is embarrassing that the lawyers and the Board of Congress have had to remind the Judiciary of the separation of powers. Let them read Montesquieu again ”.