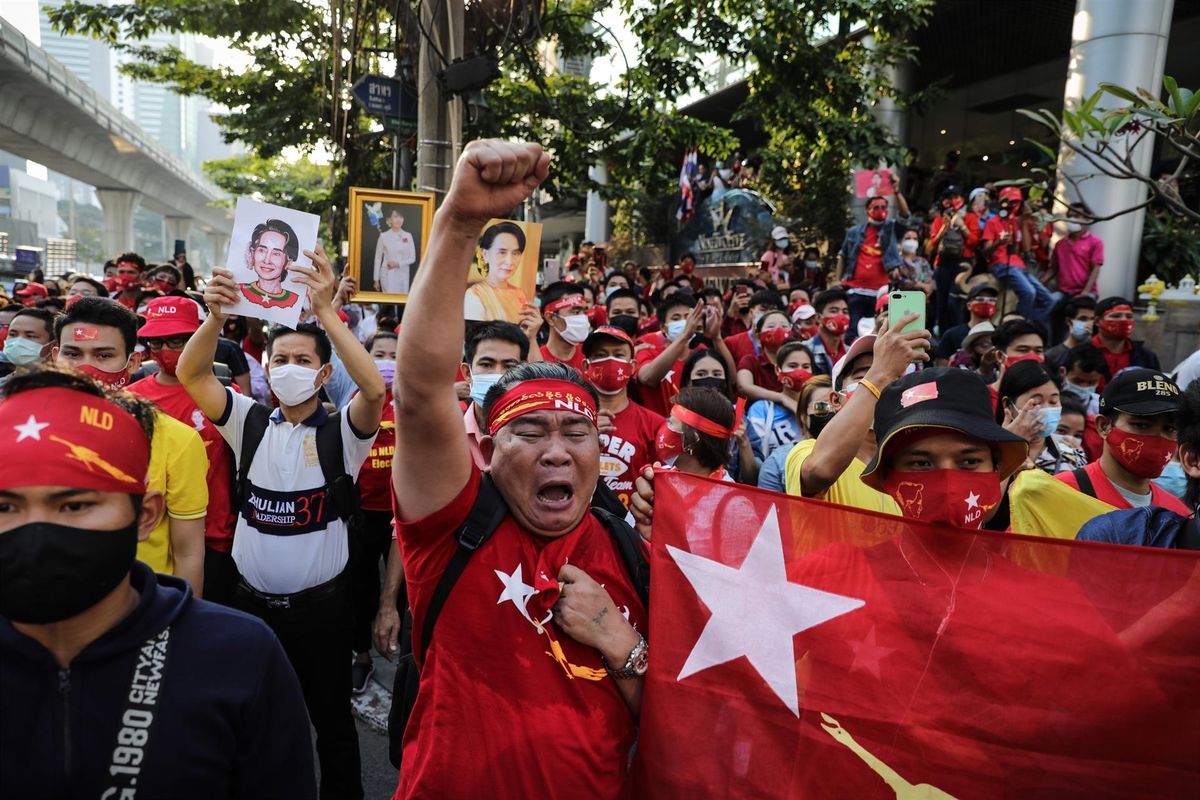 The president of the United States, Joe Biden, threatened on Monday to reimpose sanctions on Burma for the military coup, which he called a “direct assault against the country’s transition to democracy and the rule of law.”

“The United States withdrew sanctions on Burma in the last decade, based on progress towards democracy,” Biden recalled in a statement, where he specified that “the setback in that progress will require an immediate review of our laws and sanctioning authorities, followed by appropriate measures “.

In this context, the US president has indicated that in a democracy, “force cannot underestimate the will of the population or try to erase the results of credible elections.” “For almost a decade, the people of Burma have constantly worked to establish elections, civil governance and a peaceful transition of power,” he lamented, stressing that this “progress” must be “respected.”

For this reason, he has asked the international community to join “in one voice” to pressure the Burmese Army to ” immediately renounce the power they have taken, release the detained activists and officers, lift restrictions on telecommunications and refrain from using violence against civilians. “

Finally, he assured that the United States “takes note” of those who support the Burmese people “in this difficult time”, underlining that the North American country will work to “support” the restoration of democracy and the rule of law, as well as to hold those responsible for “overthrowing the democratic transition in Burma” to account.

According to US media reports, a debate is taking place at the Administration’s fate as to whether to formally call what happened in Burma a “coup,” a designation that would have implications on how to act in relation to the situation, reports CNN .

Previously, the Secretary of State of the United States, Antony Blinken, has expressed his “grave concern and alarm” about what happened in Burma, at the same time that he has asked the Army of the Asian country to release the officials and leaders of civil society detained. in the framework of the military coup.

Furthermore, he has called on the Armed Forces to “respect” the will expressed by the Burmese people in the elections. In parallel, Blinken has reiterated the United States’ support for the people of Burma “in their aspirations for democracy, freedom, peace and development.” “The Army must reverse these actions immediately,” he added.

For his part, the leader of the Democratic majority in the Senate, Chuck Schumner, detailed this Monday during the Upper House session that the United States Government should work in a bipartisan way to decide the best course of action to ensure and protect the interests of Burma. “The Congress is ready to work in collaboration with the Administration to solve the new situation”, has affected Schumer.

In the statement, the hitherto Vice President Myint Swe has transferred all power to the Army Commander-in-Chief, Min Aung Hlaing, for the duration of the state of emergency.

The coup has come after the recent tensions as a result of the general elections in November, in which both the opposition and the Army have denounced possible irregularities, although without presenting evidence.

The NGO Human Rights Watch (HRW) has called on governments “around the world” to act “as one” against the coup that has ended Burma’s “fragile democracy” and put the interests of the Burmese people first. ” to all other considerations “, as reported by Europa Press.

“China, Russia, Japan and other countries have long blocked coordinated international action to promote rights, justice and responsibility in Burma, but now they should feel pressure to reevaluate their failed policies,” the HRW director stressed for Asia, Brad Adams, in a statement, due to the coup that began this Monday with the arrest of the ‘de facto’ leader of Burma, Aung San Suu Kyi.

Adams has considered that the “scandalous assault” on democracy, “after the atrocities against the Rohingya in the country”, should be a “wake-up call” for the international community to carry out “coordinated and sustained” action by fundamental freedoms and the right of Burmese to choose their leaders.

In this sense, it has opted for the imposition of selective sanctions and seizures of equipment and weapons, among other measures, to “reverse the abuses of the military “, who it has demanded “renounce power” and release detainees who could face “mistreatment” during your arrest.

“The authorities must immediately put an end to the arbitrary limitations on freedom of expression, information, assembly and association”, has demanded, on the other hand, the NGO, referring to the right of assembly and demonstration in the face of military actions.

In this context, he has requested that they avoid the use of force to disperse these protests, something that “worries” due to the “long history” of an “excessive” use of this to repress peaceful meetings.

“The joint actions of the governments concerned must be accompanied by clear statements on what the Board should do to prevent these measures, including the unconditional release of all arbitrarily detained, the reestablishment of democratic institutions that existed before the state of emergency, the acceptance of the results of the November elections and the convocation of the upper and lower houses of Parliament, “he asserted.

The party of the Burmese Nobel Peace Prize, Aung San Suu Kyi, demanded on Tuesday the Army to immediately release all detainees , including their leader, during the military coup that took place the day before.

The National League for Democracy (NLD) also demanded that the military command respect the result of the general elections held in November, where the formation of Suu Kyi swept by winning 83% of the seats in dispute, in a statement posted on your verified Facebook profile.

“(The coup) is a huge obstacle to democratic reform (…) it is an act that tarnishes the history of the country and also the Army,” the letter remarks.

The Army carried out a bloodless coup on Monday alleging that there was a massive fraud in the elections , the second held since the transition to democracy in the country after almost half a century of fierce military dictatorship.

Shortly before the announcement of the seizure of power, Suu Kyi, several members of the government, regional presidents, NLD politicians, activists and artists were detained by the military and are still under arrest, although the charges against those are unknown. accuses them.

The United Nations High Commissioner for Human Rights, Michelle Bachelet, reported Monday that at least 45 people were arrested during the coup.

Suu Kyi and the president, Win Myint until yesterday, are under house arrest at their residences in the Burmese capital, Naipyidó.

For their part, all the new parliamentarians who yesterday had planned to swear their positions in the first session of Parliament after the November elections are “quiet” in their hotels in the capital surrounded by police and military, as revealed to EFE two of the deputies.

The situation in the streets of Rangoon, the most populated city, is calm and large security devices are not observed, as EFE was able to verify.

Most of the stores and banks, which closed the day before due to the massive influx of customers to withdraw cash, remain open today with apparent normality.

Suu Kyi asked her followers the day before to reject the coup, although at the moment there have been no protests against the coup.

While on social networks, users ask to wait at home for the guidelines sent by the leaders of the NLD.