The five best theme parks in Dubai to Enjoy with Kids 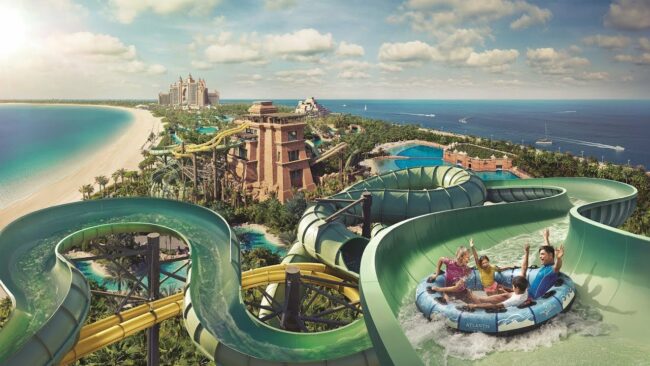 Dubai offers nonstop fun and excitement. The fantastic theme parks are a major draw for tourists in Dubai. Everyone, from young children to elderly people, may get their heart racing from the thrills available. It’s easy to see how modern ideas and more conventional ones might work well together here. It’s important to know good places to have fun, especially if you’re travelling with kids. If you’re looking for information about the best Dubai amusement parks for kids, keep reading!

Atlantis Aquaventure Waterpark is one of the largest water parks in the entire Middle East and Europe. Swimming with stingrays and sharks is the most thrilling thing you can do in the ocean. You can swim without worry because the area is enclosed. The multiple-award-winning Dubai amusement park features numerous water rides. The 90-foot-long slide through a shark-filled lagoon is one such attraction.

Keeping with the park’s overall theme, the slides are situated in the shadow of a pyramid-like ancient structure. Poseidon’s Revenge is another thrilling coaster that drops riders from a height of 75 feet before taking them on an incredible double loop. Relaxing on the 700-meter-long beach is an alternative to enjoying the slides and water activities. Seating reservations can be made for a variety of sections. If you’re looking for a good water park in Dubai, go no further than Aquaventure Waterpark.

The LEGOLAND park in Dubai is the region’s first of its kind. Legoland is widely regarded as one of the top amusement parks in the world, especially among young people. Feel your heart racing on the roller coasters and other exciting rides. In addition to the aforementioned activities, children can also enjoy racing cars and building structures. There will be no shortage of excitement for your children, as the park features over 40 Lego-themed rides.

Your child’s creativity will soar in any of the six different themed areas: Kingdoms, Adventure, Miniland, Factory, Lego City, or Imagination. In Kingdoms, children will ride the Dragon’s small coaster as they aid knights in their quest to save the princess, while in Adventure, they will ride a submarine and watch LEGO divers perform ski tricks on a wave racer. Miniworld’s interactive section features the Dubai skyline and other Middle Eastern locations built out of 20 million Lego pieces. The Lego Brick Manufacturing Process is revealed in this mode.

Some of the most exciting rides and family-friendly activities can be found at Ferrari World Abu Dhabi. Formula Rosa Coaster is a go-kart track and Ferrari factory, among other thrilling attractions. One of the largest Dubai theme parks, Ferrari World Theme is a place where families and thrill-seekers alike can spend a fun and memorable vacation.

The IMG Park in Dubai is a massive theme park with five unique areas, each with their own unique attractions. One and a half million and fifty thousand square feet. This park’s size, equivalent to 28 football fields, is practically synonymous with good times. You and your favourite Marvel and Cartoon Network characters may thrill on cutting-edge rides together.

It’s one of the most thrilling theme parks in the UAE because to its five themed zones, which include The Avengers, The Powerpuff Girls, and Dinosaurs in the Lost Valley. Multisensory adventures with Gumball, Ben 10, The Powerpuff Girls, and Lazy Town will drive your little superhero crazy. Whereas larger characters like Thor, Spiderman, Hulk, and The Avengers allow them to fully inhabit the role of super hero. Nobody, regardless of age, will be bored.

See also  Who is Jonathan Bailey dating and his love life?

At this crossroads of the real and the virtual, you may take part in some of the best gaming in the world. Major video game publishers including Capcom, Electronic Arts, Konami, Square Enix, and Microsoft collaborated on this interactive gaming experience, which features 18 outstanding attractions and rides.

You may find yourself yearning for the days of your youth as you play classic video games like Pac Man and Pinball. It’s the perfect place for kids to have fun thanks to the karaoke rooms, driving simulators, vintage arcade games, and climbing arcade games that are all available there. With cutting-edge equipment, Hub Zero transports you to a whole new world.

The top ten gluten-free restaurants in the US